Get this now!
they/them
--
a quick heads up: sometimes i don't respond to comments, so please don't get upset, i just cant even find the motivation to t a l k

Display translation
that moment when your friend jokingly insults you and you know damn well that every time you both do that its only just for laughs but then you get hurt and you're too afraid to tell them because they will think you won't know how to take jokes and be a party-pooper and that you're just another sensitive snowflake who doesn't know any better than just to be dumb and maybe even come off as childish and too demanding or annoying
not only that, but maybe you'll ruin the bond between you two and won't ever be able to talk again and that they will think differently about you

also sorry i just had to put this somewhere 😩 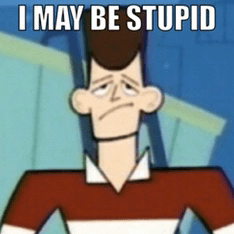