I have too many fucking kids-

Free as a bird
My Space

Headcanons for the soul

Display translation
Ok so, I’ve been messing around and writing fanfics and headcanons recently so I figured “Hey, maybe I should try drawing them!” So I did. The fic I started on a whim is called Shenanigans through the Multiverse which I’ve been updating rather frequently with new chapters over on AO3. It was more of a... idk, joke thing? But then I actually started enjoying writing it and so it’s become a little project of mine along with Goharon’s Trial and Billie’s Universe (which I still don’t have an actual name for hnnnnn-). But anyway, since I actually started writing it, I decided that I’d whip out my chest of old headcanons and take a crack at them again! It’s been pretty fun, actually- messing around and making AUs and things. Most of it has been centred around Ben since my attention is glued to him atm but I am working on others as well- mainly for Ed (FMA), Randy (RC9GN) and Link (BoTW). There are others I’ve been working on a bit as well like Jake (AmDrag) and Zak (TSS) since I started rewatching them both recently and I’ve been familiarised with a lot of the subject matter and things again. Anyway, like I mentioned, I’ve been working on headcanons for Ben 10 and decided it’s about time I fleshed it out properly. I can’t go into a whole lot of detail buuut it’s basically about a species that popped into my head called Primal Annodites. They’re like the annodites in the show but they’re pretty ancient and considered extinct. That is, until Marlious, one of the Primals, bonds himself to Ben in a bid to keep himself alive and hidden due to rogue Primals trying to hunt him down. Ben basically gains access to Marlious’ powers -including a pretty powerful new form- but, since Marlious is still sorta a thing, Ben can barely control them. They do come in rather handy for when the Omnitrix wigs out but they aren’t easy to control. Along with the lack of control, Ben’s appearance alters slightly to reflect the Primal’s nature- changes which are very easily noticed by others such as fangs. Ben does also have the tendency of going feral in certain situations where he’s in distress or upset in some way but he tends to snap out of them rather easily upon noticing a familiar face. Along with these traits, the abilities Ben’s gained or had heightened prove to be rather volatile- such as his control over mana. Gwen does try her best to help him out but the mana tends to fluctuate when Ben’s not even aware of it so, until he’s figured out a way to better handle that, the Plumbers assigned Ben an ability dampening device- aka. the “choker” shown. It only really works half of the time though. I might write this whole thing up in a document and post it somewhere at some point- I really need to start properly keeping track of this stuff. You can also find the fic I mentioned earlier in this link here:
https://archiveofourown.org/works/21777508/chapters/51962698 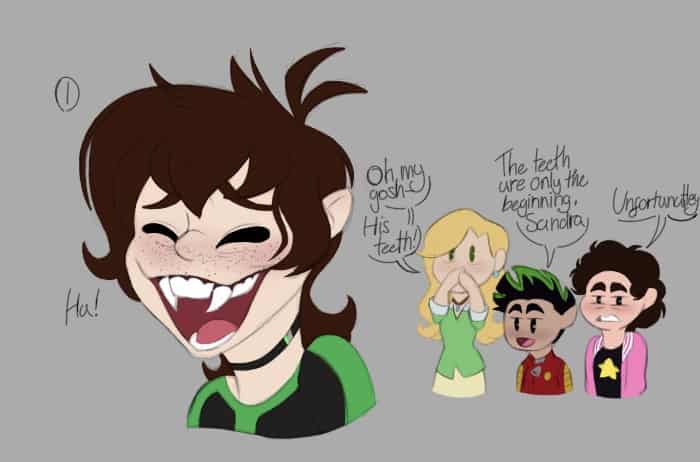