We interviewed Liam Gray and Mangaka Ody. Their passion for manga is inspirational! 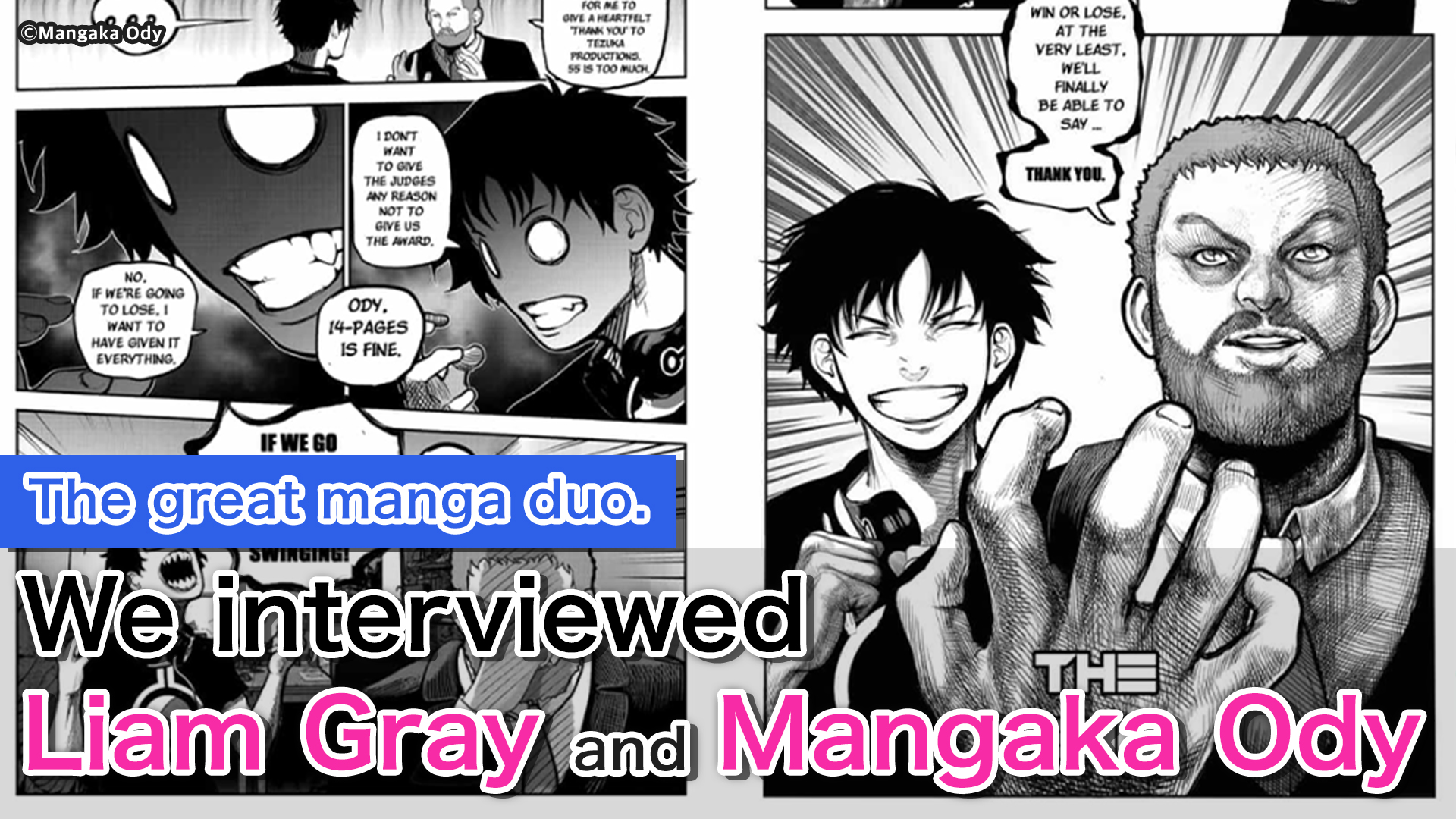 This team posted a manga on ART street that is full of potential, and definitely worth checking. Liam Gray, a MediBang ambassador, is the writer/editor. Mangaka Ody is the artist. Let's find out how they create such amazing content!

- What is your work environment for writing? (Example: Text editor of choice, music or no music, etc.)

Liam: I need calm and focus. While crafting a story, I build vast tapestries and story webs in my mind. I am a real stickler for continuity. I want consistency in my storytelling.
To that end, I sometimes create charts, maps, and my workplace is often cluttered with notes and explanations to things only the most hardcore fans would ever think to ask.

- Are there writers or artists that inspire you?

Liam: The mangaka that most inspire me and have shaped me as an author are Osamu Tezuka, Go Nagai, Leiji Matsumoto, Jyoji Morikawa, Shoji Kawamori, Nobuyuki Fukumotom, and Shotaro Ishinomori.

- What do you like to do in your free time?

Liam: What’s that?
I wake up in the morning, make manga and then go back to sleep. I'm not even kidding. If I’m not making manga, I am promoting it on social media.
If I had a hobby, I guess it would be archiving old or forgotten anime on VHS and trying to preserve them, so they do not become lost media. 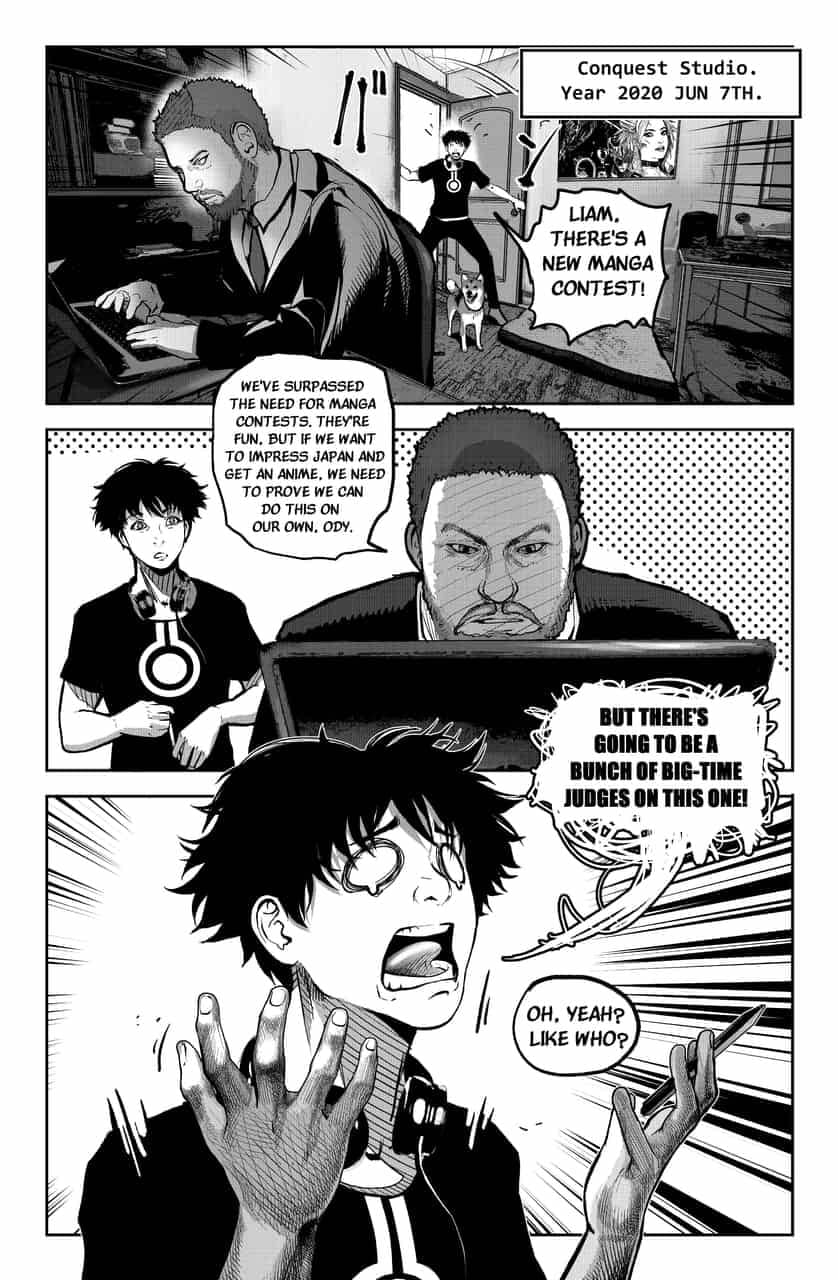 - So XENOTYPE is about a teenage artist who gains the ability to rewrite his DNA, and turns himself into a hero. It also has dark and edgy areas. How did you come up with such a story?

Liam: I was inspired by works like John Carpenter’s The Thing, Go Nagai’s Devilman and BioBooster Armor Guyver, but my biggest influence was actually Osamu Tezuka’s The Three-Eyed One.

Like most of my work, XENOTYPE is a complicated story disguised as a simple one. While appearing as a basic tokusatsu series, it’s really a story of nature versus nurture.
Faced with the horrifying realization that monsters exist and rule the world, Felix (our protagonist) awakens the power to reinvent himself as almost anything, and he chooses to become a superhero like the ones in the comics he reads.
However, as time goes on, the question becomes: who or what will Felix become? Will he be shaped by his experiences or will his newfound power shape him?
Will he manage to defeat the sinister Black Diamond Conspiracy, or will he become no different to the gene-warped monsters he fights?
It’s important to have characters and stories people can connect to. I feel like I’m seeing that less and less these days. I want to tell stories with actual conflict, continuity, and consequence.

- Since "The Three-Eyed One" might not be something most young people have seen, even the Japanese, can you tell us why they should see or read it?

Liam: Like most of the work of Osamu Tezuka, the Three-Eyed One (Mitsume Ga Tooru) is a timeless classic.
Though somewhat less known that his other works, The Three-Eyed One was an episodic adventure exploring the dual nature of humanity; with protagonist Hosuke Sharaku serving as both the protagonist and the antagonist. It helped spark the Japanese’s public interest in supernatural powers, lost ancient civilization and the occult. Ultimately, it’s a story built on the premise that any civilization, no matter how prosperous, will eventually fall into ruin due to its own vice and self-indulgence.
I don't think a lot of modern series would even exist without the groundwork it laid..

- Can you tell us your process of writing for mangas?

Liam: As a storyteller, I am a planner. I firmly believe that filler is a disservice to the audience and an author should know how his story ends before he writes the first issue.
The cutting room floor of the Conquest Studio is knee deep with discarded concepts. My goal is to create stories that resonate with readers and create excitement. Too many stories today are recycled. Manga was once a bastion of original ideas. As an older Otaku, I remember the risk and innovation in early anime.
Once I have an idea with a sound foundation, I do about three chapters worth of production; measuring the pacing and trying to balance character and action. I'll often chart a year (12 chapters) ahead and develop full character arcs, twists, etc.
A good manga must be interesting, but it must also have its own identity while being comfortable and easy for the reader to slip into. A reader should be able to pick up any chapter you are working on and dive right in. Every manga is someone’s first manga! 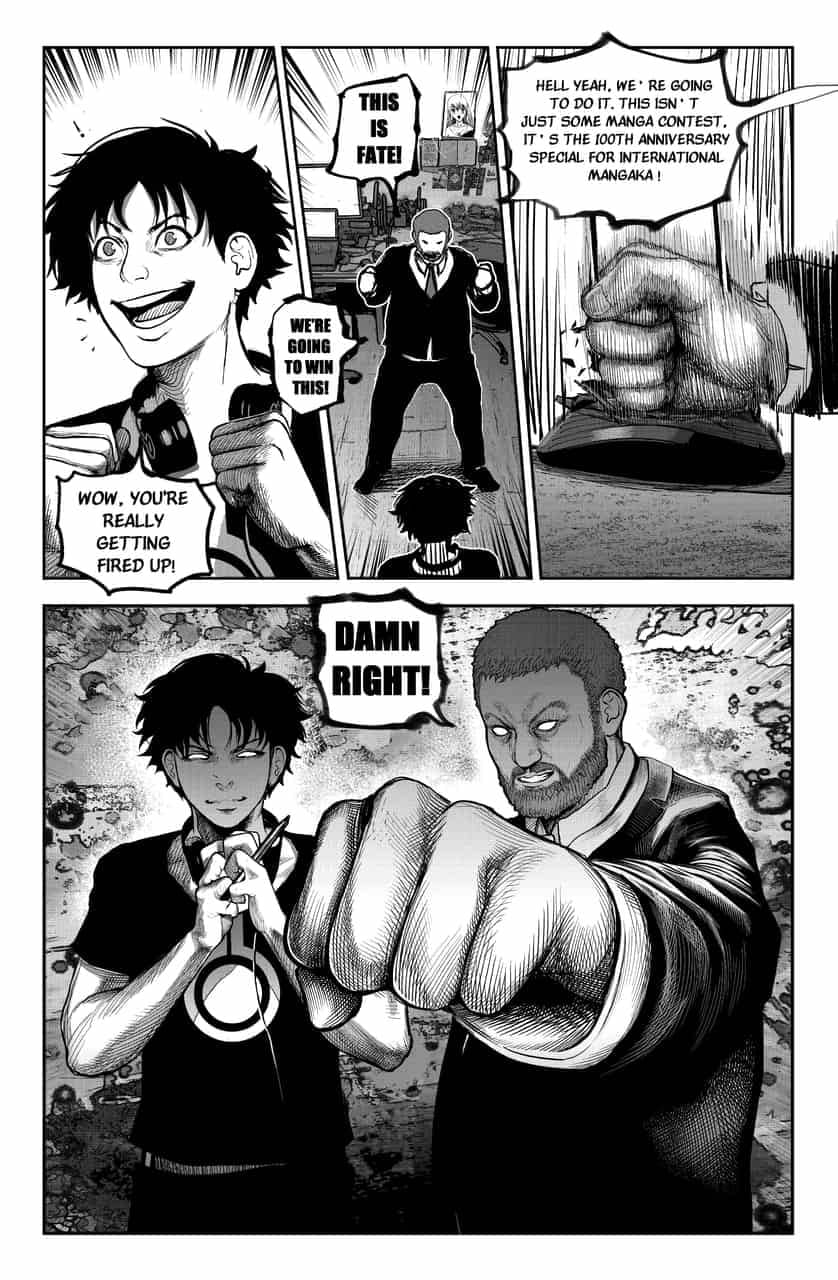 - Have you ever taken writing courses or had training?

Liam: I never wanted to be a writer, but it's something I've been doing now for almost 14 years.
My mentor, the writer who set me on this path, told me that the most important part of being a storyteller is having a voice. The professional part is just identifying which parts are the most interesting. I've been trained in classic western comic book writing and I've worked in a number of fields.
Not bad for a dead-end punk and a high school dropout, right?

- Many manga artists struggle with stories. What advice can you give them?

Liam: Go back to when you were five years old and think of all the things you loved and why. Then learn to recognize your bad ideas.
I always tell storytellers starting out to find the greatest ending possible. Don't make sprawling epics that go on forever.
Once you have a great ending, the story of how the hero gets to that point will usually come a lot easier.
And remember, at the end of the day it doesn't matter if YOU like something. It's whether or not OTHER people do. Your job is to entertain them. Leave your ego by the door and do what needs to be done.

Next How did Ody learn to draw? Previous How do they create a good co-work environment?
See Liam Gray's artwork